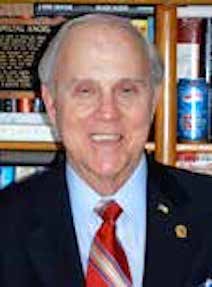 Captain William G. Earnest was born May, 1939 in Tuscaloosa, AL. Following high school, he joined the Navy in July, 1956 and attended Recruit Training in Great Lakes, IL. His early enlisted tom included the USS CROW (MSC(0) 7), USS VITAL (MSO 474) and USS VALOR (MSO 473). During this time, he was advanced to Chief Petty Officer.

Captain Earnest also served two tours in Vietnam – first, as a Patrol Boat Commander from 1965 -1967 and then in 1968, as an advisor to the First Patrol Boat Squadron to train the Vietnamese in patrol boat operations. During both tours, he participated and led patrols in combat operations against North Vietnam insurgencies. He was wounded during patrol and returned to the States in 1969.

In 1969, while serving as Engineer Officer aboard the USS SALUTE (MSO 470), Captain Earnest was selected and promoted to Chief Warrant Officer. After commissioning, he attended Warrant Officer Candidate School, Newport, RI and was awarded the Inspirational Leadership Award for the Class of 1970. Captain Earnest’s first officer assignment took him the USS SHANGRILA (CV A 38). Subsequent tours in Pearl Harbor, HI included Engineer aboard the USS ELKHORN (AOG 7), USS GRAPPLE (ARS 7) and Material Officer for Commander, ServiceSquadron FIVE. He returned to the East Coast in 1976 for duty on the USS SARATOGA (CV 60) followed by a tour as Engineer aboard the USS KALALMAZOO (AOR 7). He then reported to Readiness Support Group, Mayport, FL, where he served as Officer in Charge of the Mobile Training Team. In December 1982, he reported as Officer in Charge of Battleship IOWA’s Liaison, Pascagoula, MS. IOWA was commissioned April 28,1984, and he became the Engineer Officer.

Captain Earnest assumed command at SIMA Charleston in June, 1985. Under his command, SIMA was awarded two Meritorious Unit Commendations and the 1987 Secretary of Defense Maintenance Award. After SIMA, Captain Earnest returned to sea as Engineer aboard the USS SAIPAN (LHA 2), then back to shore duty as the Director of Training at Fleet and Mine Warfare Training Center.In September, 1991, Captain Earnest once again took the helm of SIMA Charleston. Under Captain Earnest’s tutorage, SIMA received the Navy Unit Commendation, three Meritorious Unit Commendations, the Secretary of Navy Activity Award for Achievement in Safety Ashore, the Secretary of Defense Maintenance Award and the Armed Forces top maintenance award, the Phoenix Award. Since 1970 Captain Earnest has been recognized numerous times for his leadership abilities. Awards include the Navy League’s Leadership Award, the Admiral Ben Morrell Award for Inspiration Leadership, six separate nominations for the John Paul Jones Award, the Martin Luther Award for Community Service and the Reverend Daniel Joseph Jenkins Select Award for directing the renovation of the Jenkins Orphanage.

After Navy retirement, Captain Earnest worked as Technical Advisor and Consultant for the South East Regional Maintenance Center, Mayport, Florida. During his eight year tenure at this position he was awarded two of the highest Civilian awards presented by our government. The Meritorious Public Service Awards.

Captain Earnest is married to the former Judi Brady of Northport, AL. They have two children. Their son, Chris, is in specialized medicine, Jacksonville, FL. Their daughter, Lisa, is a Doctor at Johns Hopkins in Baltimore, MD specializing in Otolaryngology and facial plastic surgery.

Captain Earnest serves as a Director for Q.E.D. Systems, Inc., a Company with Offices worldwide. He continues to work with our superb military men and women and really enjoys working with the Sailors in support of the United States Navy.