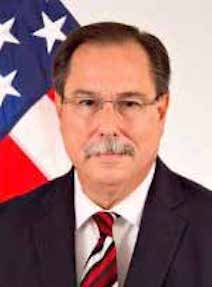 Robert (Bob) Hughes has been with NAVSUP Weapon Systems Support (Previously NAVICP) since 1982. His primary duty is to review and recommend approval of viable manufacturers of both critical and non critical engines spares used in support Navy and Marine Corp Aircraft worldwide. He has provided guidance to many businesses with source approval, qualification testing, technical data support and contracting issues. He is a team leader in both Navy Quality Audits and First Article Inspections at manufacturing sites.

Accomplishments include: Locating and approving a Small Business in Kent Washington to repair/overhaul the Variable Pitch Propellers for the Navy P3 and C130 as well as the propellers used on the E2C by both Japan and Egypt. Working with the FST Engineers at FRC Jacksonville and getting a small business in Long Island New York approved for the manufacture of the F404 Afterburner Liner, Mixer and the primary and secondary exhaust nozzles. This engine is used on the F18 Hornet. Locating and approving a Service Disabled Veteran Owned Small Business (SDVOSB) for the manufacture of multiple critical engine spares for the F404, T58, T700 and T64 Engines.

Mr. Hughes’ background includes, Jet Engine Mechanic for J-52 Engine (A6E Intruder) and T56 Engine (P3 Orion) He is also qualified Aircrew for the P3 as both Flight Engineer and Sensor Station Operator with over 1500 hours seat time supporting Anti-Submarine Warfare Operations in the Mediterranean, the Arctic Circle and the Pacific. His experience spans 23 years of both active and reserve duty with the U.S. Navy. He has also flown many search and rescue missions for both the US Navy and the US Coast Guard.