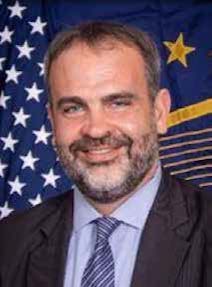 Assistant Secretary of the Navy

EIn May 2022, Mr. Tommy Ross began Performing the Duties of Assistant Secretary of the Navy for Research, Development and

Acquisition. From January 2021 to May 2022 Mr. Ross served as Chief of Staff to the Secretary of the Navy, the Honorable Carlos Del Toro.

Previously, he was Senior Director for Policy at BSA | The Software Alliance, an international trade association representing the world’s leading software and data service companies. Responsible for policies relating to cyber security, 5G, and law enforcement access to digital evidence, he led development of BSA’s Framework for Secure Software, a first-of-its-kind risk-based framework for evaluating security of software products and services.

From 2005 to 2009, he served on the staff of Rep. David Price of North Carolina, first as Legislative Assistant and, subsequently as Legislative Director. He also staffed Representative Price’s work as Chairman of the House Democracy Partnership, a congressional commission working to strengthen institutional capabilities of legislatures in developing democracies. Previously, he served as a policy analyst for the Senate Democratic Policy Committee, where he supported the Democratic Caucus on national security policy and communications. He began his career as a research assistant for Senate Majority Leader Tom Daschle.

Tommy has served as Chairman of the Board of Directors for Mine Action Group America and as a Senior Associate at the Center for Strategic and International Studies. He is a graduate of Davidson College in North Carolina, and holds an M.A. in Theology and Ethics from Union Theological Seminary in New York. He has completed the Air Force’s Air Command and Staff College as well as a Certificate in Africa Intelligence Studies at the National Intelligence University. Tommy and his wife Lindsay are the proud parents of daughter Ruby and son Sebastian.