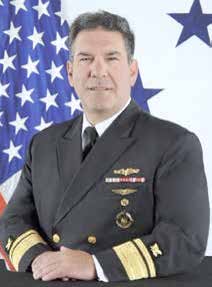 Rear Adm. Peter Stamatopoulos is a native of San Diego. He earned a bachelor’s degree in business administration from the University of San Diego and received his commission in 1988 through the Navy Reserve Officer Training Corps. He holds a master’s degree from the Naval Post Graduate School, and is a graduate of the Columbia University Senior Executive Program.

As a Navy Supply Corps Officer and Joint Logistician, he has deployed across the globe in submarines, amphibious assault ships, aircraft carriers and operational staffs. In his most recent assignment, he served as director of logistics (J4), U.S. European Command.

As a flag officer, he served as director, supply, ordnance and logistics operations, Office of the Chief of Naval Operations N41, Washington, D.C.; and as fleet supply officer on the staff of Commander, U.S. Fleet Forces Command.

He is entitled to wear the Defense Superior Service Medal, Legion of Merit and Meritorious Service Medal along with various other personal, unit and service awards. He is also a qualified Naval Aviation Supply officer, Submarine Warfare Supply Corps officer, Joint Duty qualified officer and member of the Defense Acquisition Professional Community.